What is your Heart Beat telling you?

One of the key vital signs medical professionals routinely check to determine the health state of your body’s inline device (heart) is to measure blood pressure. During each heartbeat, blood pressure varies between a maximum (systolic) and a minimum (diastolic) pressure. They check the pressure of the blood entering the heart and also the pressure as it exits. In other words they check it bi-directionally.

What is a heart beat? 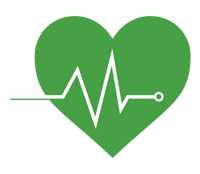 We use Heartbeat packets (HB) in our EdgeSafe: Bypass TAPs in a similar manner: to check the health of an active inline device like an IPS (Intrusion Detection System) or NGFW (next-gen firewall). We check the status of the link going into the device and also the link coming from the device to monitor the health of the device itself. Other manufacturers may only check HBs in one direction.

The concept of Heartbeat packets in our Bypass TAPs is simple, but the protection they provide your network is invaluable, much like why your doctor tests the “links” as well as the health, of your body’s “inline device” to prevent a serious failure in your body’s network.

The way it works is that the east bound live network traffic enters the TAP. A Heartbeat packet is added by the Bypass TAP to the data, and both are sent out to the input port of the inline device. The inline device performs its task and then sends the data back into the TAP with the Heartbeat. The Heartbeat is stripped out by the TAP, (HBs are never sent into the live network) and the data is sent out of the TAP and back into the live network. This would be normal operation, where the TAP is always invisible to the network. 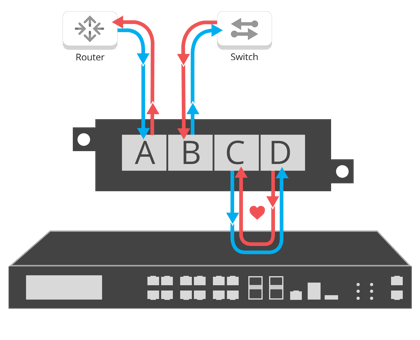 Sometimes, the inline device needs to be taken offline for a number of reasons: reboot, software/firmware updates, maintenance, replacement, or even failure. If the HB sent from the TAP is not received back to the TAP, indicating the inline device is offline, the TAP will immediately bypass the device (fail safe). That is, the east traffic entering port A of the TAP will automatically be connected to the west traffic out port B and the network will continue to stay up despite the fact the inline device is offline. No network downtime. No single point of failure.

After the maintenance is performed or the issue is resolved, and the inline device is back on line, the HBs will again be detected by the TAP, and the TAP will automatically start routing the traffic back through the inline device resuming normal activity