3 Benefits of a TAP Fabric in OT Networks

When the subject of Network TAPs (Test Access Points or Traffic Access Point) are brought up, the image that may come to people’s mind is a device that 'taps into the network' to provide packet visibility by sending copies of traffic to an analyzer.

And on a basic, yet important level this is spot on. Network visibility has quickly become the backbone of modern network and security architecture. Though many people may not think about the optimization options a TAP also provides engineers and architects as they plan the best way to connect a network.

This is the typical use case people use a network TAP for. A standard TAP is made up of four (4) ports A, B, C and D.  Ports A and B are the network ports and C and D are the monitor ports. Simple Implementation of a Breakout TAP

This TAP is generally used when the traffic on the attached link is heavy enough to cause over subscription if the send and receive traffic were aggregated together to one monitor port. This TAP requires that the tool or appliance it is attached to requires two network interface cards (NICs) in order to capture both the eastbound and westbound traffic streams. Learn more about breakout or normal TAP mode. Diagram 2: The Aggregation TAP copies data in both directions for monitoring .

Often times there are not enough SPAN ports on a network router or switch to go to multiple analyzer tools and appliances.  A convenient way to solve this problem is to send the SPAN or mirrored input to a replicating TAP.  The traffic on the SPAN input can now be distributed out to up to three (3) different tools. Learn more about replicating/SPAN taps. Diagram 3: The Replicating TAP takes a SPAN input and sends this data to multiple locations.

Network TAPs are designed to copy all of your data, but often your tools don’t need to see 'everything.' Your VoIP or Wireshark only needs to see the traffic required to do it's job. This is where Garland's unique filtering is a desired feature because you can filter out what is not required by the tool –  ensuring the monitoring ports will not be oversubscribed.

This scenario (below) shows four 1G links with a filter applied and then aggregated together and sent out port D on TAP four to the monitoring tool. Learn more about filtering taps.

An important tool to allow placing active, inline appliances into a critical link without introducing a SPOF (Single Point of Failure). In a scenario where you want to install an inline appliance like a next-gen firewall (NGFW) or intrusion prevention system (IPS), the device needs to be actively inline to perform it's job of actively blocking threats.  However, having the appliance active, inline could prevent a network failure if the device fails, the link goes down, or you need to take it off-line or out-of-band for updates or trouble-shooting.
The bypass TAP with failsafe will prevent this from happening.  The bypass TAP inserts a heartbeat packet into the traffic that it sends out to the in-line appliance and as long as the in-line appliance is on-line, the heartbeat packet will be returned to the TAP. The TAP will remove the heartbeat packet before sending the traffic back into the network. If anything goes wrong with the TAP or the tool, the TAP's failsafe feature will keep the link (network traffic) flowing. Learn more about the bypass TAP. 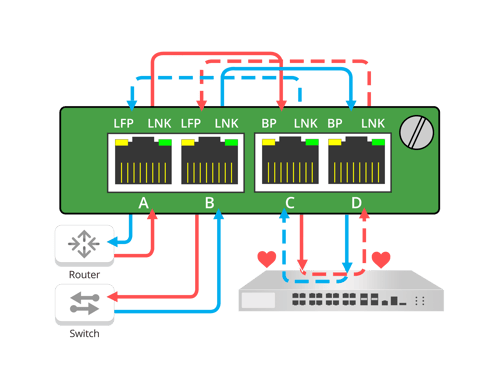 What happens when you have a monitoring tool that isn’t the same media type as your live connection, or visa versa? You might have a single-mode, extended-range fiber network link that stretches about 10km. But your network analyzer is sitting two feet away. Your first option might be to purchase the transceivers to match the links; however, this is an expensive and inefficient approach. Or more common, converting a fiber link to copper monitoring ports allowing you to still use your copper tools and appliances. This is just one scenario below of media conversion utilizing a network TAP. Learn more about media conversion network TAPs.

Media Conversion Single-mode to SFP: convert single-mode fiber over to multi-mode fiber in the same manner by deploying a TAP that has single-mode network ports and SFP monitoring ports, shown below.

Media Conversion: Copper to SFP: Take a copper link and convert it to single-mode or multi-mode fiber using a TAP that has copper network ports and SFP monitoring ports, shown below. I hope this takes some of the mystery out of network TAPs and how they can help you keep your network running smoothly and secure.