Millions of industrial devices operate at energy, manufacturing, transportation, mining, and other industrial sites. Comprehensive cybersecurity that focuses on asset visibility proves essential in reducing risk and improving the resiliency of industrial operations. Dragos and Garland are working together to improve cybersecurity and operational reliability while reducing integration efforts and costs.

Traditionally, operational technology (OT) networks were architectured almost wholly separated from information technology (IT) networks. However, as industrial environments support digital transformation, they shift to a more interconnected architecture, enabling cyber threats to reach beyond the traditional IT assets. Thus, Cybersecurity teams are being challenged to secure and then manage networks that traverse their entire organization, requiring operational visibility to include the wide variety of OT and IT devices on their networks.

The need for passive, real-time monitoring is more vital than ever in an ICS/OT environment saddled with legacy equipment. Having comprehensive visibility of the ICS/OT environment is both the tactical and strategic foundation of an effective cybersecurity program. Organizations can leverage Garland Technology’s visibility solutions to feed data to the Dragos Platform to help streamline the security of the ICS/OT network infrastructures while helping to avoid operational impacts in legacy systems. Garland’s passive network TAPs (test access points) are purpose-built hardware devices that provide essential access and monitoring capabilities in ICS/OT environments. The passive network TAPs are available in fiber and 10/100M/1000M copper models to support all legacy and modern architectures yet will not add any latency or security risk to the environment. By tapping points of interest throughout the ICS/OT network, security and other monitoring solutions can receive 100% of the traffic to enhance their defense capabilities without introducing new or manipulated traffic to the production network streams. Organizations can centrally visualize the systems, devices, and interactive communications between them by utilizing the joint Garland and Dragos solution. Additionally, they can continuously monitor and detect threats as they occur and use prescriptive workbench tools for more efficient investigations and responses. With this enhanced deep packet level of visibility across critical infrastructures, defenders can more competently protect their operations from potential disruption caused by threats and anomalies while improving their safety, reliability, and cyber resilience across their unique network infrastructures.

Within the OT environment, a full-duplex copy of the network traffic from each site and segment is fed through the Garland network TAPs to minimize blind spots. The Garland network visibility solution delivers this duplicated traffic from multiple links and locations into the Dragos Platform. The Dragos Platform then analyzes the traffic to create an accurate and comprehensive asset inventory along with a network map that visualizes all assets' interconnections. With the continuous data feed, the Dragos Platform analyzes the network traffic and produces notifications of new devices, connections, asset vulnerabilities, misconfigurations, and other suspicious events. The Dragos Platform provides advanced threat detection, including adversary behavior and 'tradecraft,' mapped to MITRE ATT&CK for ICS for the ICS/OT network supported by Garland's complete network visibility solution.

Benefits of the Garland and Dragos Solution

Network TAPs and SPAN (switch port analyzer or port mirroring) are the two most common methods for network traffic access used by data monitoring and security analysis solutions. There are significant differences that can affect the integrity of the network device, the traffic being analyzed, and the performance of network tools leveraging the data. The following discusses three different use cases where TAPs versus SPAN options would be best leveraged in regard to monitoring the ICS/OT network.

Legacy ICS/OT networks were designed primarily with reliability and safety in mind, evolving business objectives have caused the underlying OT systems to keep pace over the past decade to support newer business requirements. When you start to push legacy equipment to transfer data outside of these proprietary systems, you open the industrial network to security vulnerabilities. The basic architecture below depicts a scenario where legacy networking devices are unmanaged switches (no SPAN option) or managed switches that lack the resources to support SPAN capabilities. Deploying Garland TAPs designed to support 10M/100M/1G between the two network segments will provide the Dragos Platform with at least a baseline amount of data to provide asset inventory, vulnerability management, and threat detection in a single application, making your cybersecurity teams more effective. 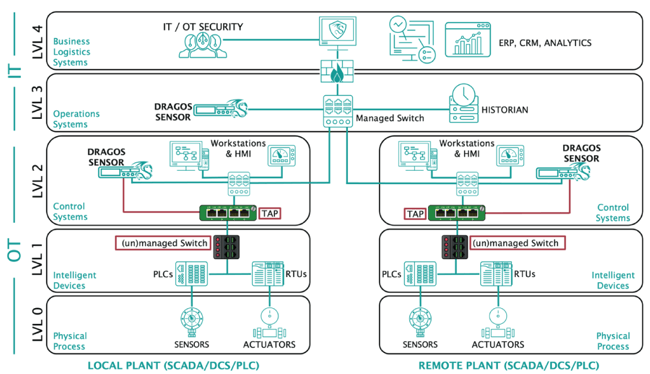 As ICS/OT environments get upgraded and modernized, the network switches include features that help support monitoring requirements. For example, port mirroring, also known as SPAN (Switch Port Analyzer), are designated ports on a switch programmed to send a copy of network packets seen on one or more ports to another port, where a monitoring solution can analyze the packets. The basic architecture below depicts a scenario where several site locations have SPAN capabilities; however, the physical location cannot support additional hardware due to space, power, environmental, or budget constraints. Deploying Garland's High-Density Aggregator Network TAPs will allow multiple sites to SPAN their traffic to a single aggregator. The TAPs will then send the data to the Dragos Platform to enable comprehensive asset inventory, vulnerability management, and threat detection view making your cybersecurity teams more effective. Depending on the physical and network configuration, it is also possible to leverage the port pair functionality of the Garland TAPs and implement the device inline, minimizing the load of the existing network devices, and the risk of SPAN packet drops.

With the changing cyber-threat landscape impacting how the management of ICS/OT environments occurs, the need for passive, real-time monitoring is more vital than ever, especially for infrastructures with an abundance of legacy equipment. As with any solution selection process, organizations must traverse through a series of requirements before making a final decision. To ensure that the comparison process for each solution is equal and addresses the essential goals, the basic architecture below depicts a scenario where a proof-of-concept, staging, pilot, or training simulator environment is set up. This environment provides managed switches that support SPAN and a replica of a production environment that mimics where the solution will ultimately monitor and protect. Deploying Garland's High-Density Aggregator Network TAPs allows consolidation of the traffic on the two networks, then sending that data to the Dragos Platform and another monitoring solution simultaneously. This configuration provides a side-by-side comparison of how each solution handles asset inventory, vulnerability management, and threat detection with the same data. It is also possible to leverage the port pair functionality of the Garland TAPs and implement the device inline, minimizing the load of the existing network devices, and the risk of SPAN packet drops.

Advantages of the Joint Solution

• Minimize risks to ICS/OT environment and maintain optimal device utilization by transferring the monitoring demands to systems and devices that are not critical to the infrastructure.

• Comprehensive asset visibility supported by virtual or physical appliance options for deployment within hybrid environments enabling detection of ICS/OT security threats regardless of the infrastructure used.

• Easy configuration and deployment options ensure that network infrastructure reliability is maintained and implementation costs for monitoring solutions are minimized.

Dragos has a global mission: to safeguard civilization from those trying to disrupt the industrial infrastructure we depend on every day. The practitioners who founded Dragos were drawn to this mission through decades of government and private sector experience. Dragos codifies the knowledge of our cybersecurity experts into an integrated software platform that provides customers critical visibility into industrial control systems (ICS) and operational technology (OT) networks so that threats are identified and can be addressed before they become significant events. Our solutions protect organizations across a range of industries, including power and water utilities, energy, and manufacturing, and are optimized for emerging applications like the Industrial Internet of Things (IIOT). Dragos is privately held and headquartered in the Washington, DC area with regional presence around the world, including Canada, Australia, New Zealand, Europe, and the Middle East. Fore more info, please visit: dragos.com

Join ICS Village as they demonstrate how companies with industrial control systems gain visibility by deploying OT Security tools with Dragos and Garland Technology. Review how to overcome legacy equipment challenges, aggregate distributed networks, and how to launch a proof of concept design to quickly meet today’s requirements. Learn how Dragos and Garland Technology can help you accelerate and mature your ICS/OT cybersecurity programs through asset discovery, streamlining, and complete packet visibility.

Jason Farmer, Solutions Architect at Dragos, Joshua Carlson, Senior Business Development Manager at Dragos, and Neil Wilkins, Garland Technology's EMEA Technical Manager will be discussing changes in ICS/OT environments that driving the need for increased visibility and how together Dragos and Garland Technology provide a simple, scalable, and easy to use solution. 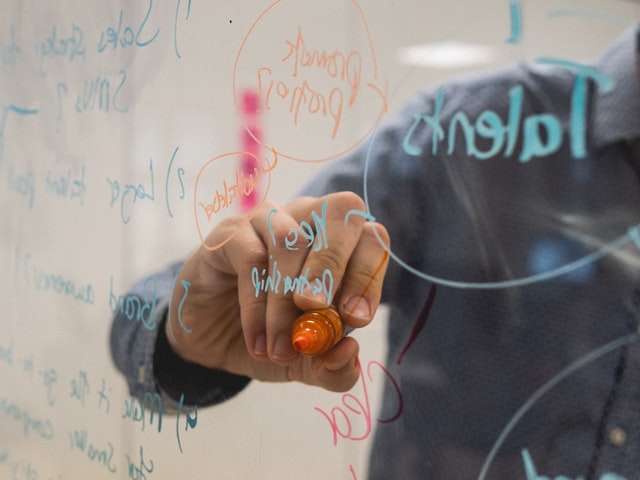 Interested in hearing why Network TAPs should definitely be used to connect Dragos to your network?

Join us for a brief network Design-IT Demo or consultation. No obligation - it’s what we love to do.