In other words, both software and demand are always light-years ahead of infrastructure and the human psychology that dictates IT decisions at enterprises—and that gap is widening.

One of the most effective performance solutions for organizations that need more bandwidth, but cannot commit to a full infrastructure migration is port channel architecture. At its most basic, port channel architecture—the generic name for Cisco’s EtherChannel®—unifies up to four separate physical Ethernet links into one link, resulting in a higher-speed connection and increased bandwidth.

But while port channel architecture is an ideal way to support higher demands on networks while enterprises are in the process of migrating their infrastructure, it’s by no means a perfect solution. Because port channel architecture combines up to four separate links into one and enables higher bandwidth than infrastructures would normally handle, it also raises issues with network visibility, traffic monitoring, and security.

Why Is Tagging Packets Necessary for Port Architecture Environments?

1)    Traffic from the four physical links is received by the network TAP and tagged according to its original link.

2)    The traffic is aggregated and load balanced by the network TAP so it does not overwhelm the network, and sent to in-line security appliances such as web application firewalls (WAFs) in a manageable distribution.

3)    The security appliances scrub packets to remove any malicious information.

4)    The security appliances send back the traffic to the network TAP, which removes the tags.

5)    The scrubbed packets are sent to their destination.

This process ensures that port channel architecture environments continue to support and monitor in-line security appliances, guaranteeing safety as well as functionality in this transitional environment.

One way to support in-line security appliances, such as your Next-Gen Firewall, is through using a network TAP, such as Garland Technology’s FAB, in conjunction with an external network TAP. Another, simpler option is an integrated solution, such as Garland’s EdgeLens® hybrid bypass TAP.

EdgeLens® manages both in-line security appliances and out-of-band monitoring applications, supporting filtering, aggregating, load balancing, and packet tagging for whole-network visibility. Integrated solutions, such as EdgeLens®, are ideal for enterprises that are transitioning to higher speeds and increased bandwidth, and don’t want to invest too much time, energy, and money into overly complicated technology in the interim. 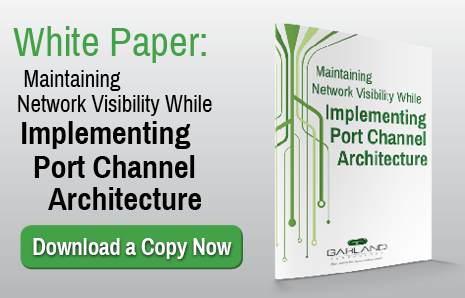