Addressing Requirements for measurement analysis at the packet layer

Interactive problems, unexpected behavior of applications or networks, poor  configuration or the desire for solid evidence require manual troubleshooting by an  administrator. The network could be responsible for performance problems in multiple areas for different reasons:

Allegro Packets addresses possible performance limitations, like how to measure and quantify them, how to show their impact, and suggest meaningful explanations and ways to correct them. It's about identifying potential performance issues, solving them faster and more accurately, while working more effectively with users and application owners. Gaining full network visibility at the packet level is an essential requirement to carry out analysis and measurement.

Questions and Answers at the Application Layer

We assume that the client-to-server communication via request/reply mechanism is based on the TCP/IP transport protocol. This procedure is used in nearly all interactive business applications.  These include web-based applications, fat client applications, file server accesses, file transfers, backups, etc. Since only the TCP/IP protocol is considered, this excludes voice and video  applications. These use other transport mechanisms.

At the receiving end of the connection (the server), the application data is extracted from the  packets transmitted over the network and reassembled as application layer messages and  delivered to the associated service for processing.

Once application layer internal processing is completed, the server forwards the response to the  server's TCP stack. The message text is segmented and transmitted to the client over the network.  The performance of this request/reply exchange of information is determined by two factors:

Therefore, both areas should be considered separately in a performance analysis. The  information reassembled after transmission represents the network-centric view of the  application, while the packets collected by the Allegro Network Multimeter in a recorded pcap file inform us how efficiently the network is transporting the messages.

Determination of the Processing Times

To analyze application performance and operational performance in particular, it is only necessary to examine the factors that affect the transmission of the operational request and  the resulting response. The difference lies in the processing times of the clients and servers and  the delays occurring on the transmission medium. If the flow chart is extended, the total delay is  divided into the following four categories:

The measurement of the transmission delay starts with the first packet transmitted by the server  in response to a previously received request and ends with the last packet of the reply sequence.  This group of packets represents the entire message transported over the network. 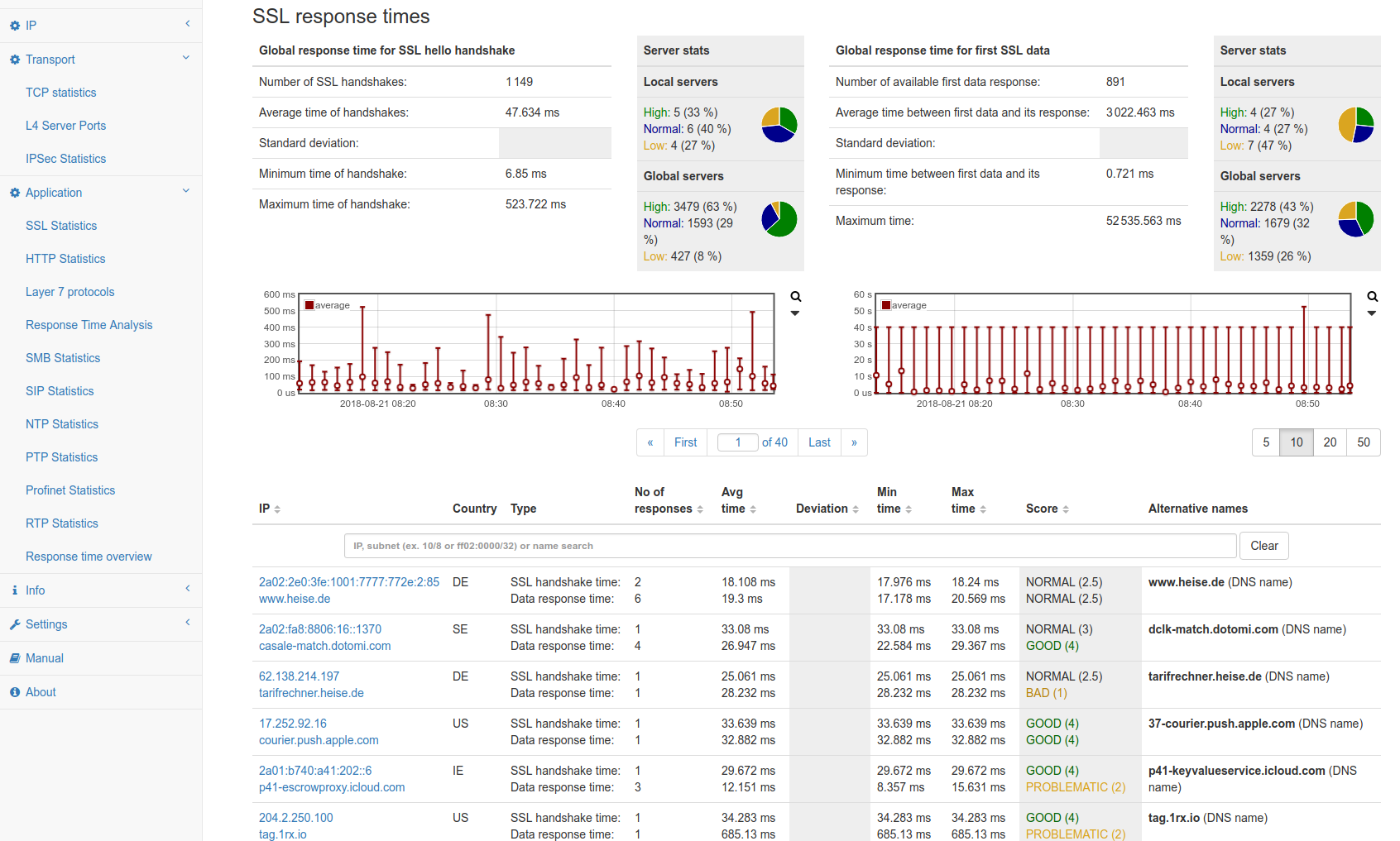 The described measurements enter into a performance analysis framework. This framework  describes nine potential performance bottlenecks between the clients, the network and the  servers. Therefore, each application performance assessment should analyze all twelve problem  areas:

From Application Messages to Network Packets

By receiving packet level data from Garland Technology at the application layer, the majority of information is transmitted in more than one data packet.  The information segment size is typically larger than the maximum segment size MSS or payload size that can be transmitted by a network packet, which is typically 1460 bytes for Ethernet. The packets assigned to a request or the resulting response can be described as one data  flow. The combined payload of all data packets of a data flow represents the messages  transmitted at the application layer.

In order to drive the high performance diagnostic appliances like the Allegro Network Multimeter, Garland Technology helps to provide packet level data carried across the network. Since the packet is the most granular measure needed for network administrators to gain complete visibility of the network traffic, the Allegro Network Multimeter relies on Garland’s visibility solution to deliver the full spectrum of data. This allows for a highly efficient solution to evaluate and measure traffic up to 100G without delay.

For more information visit the Garland Technology and Allegro Packets joint solution. Looking to add visibility to your industrial environment, but not sure where to start? Join us for a brief network Design-IT consultation or demo. No obligation - it’s what we love to do.

Klaus is the Managing Director at Allegro Packets.